HER09 Supine Orchestra - Oil On Beaverboard 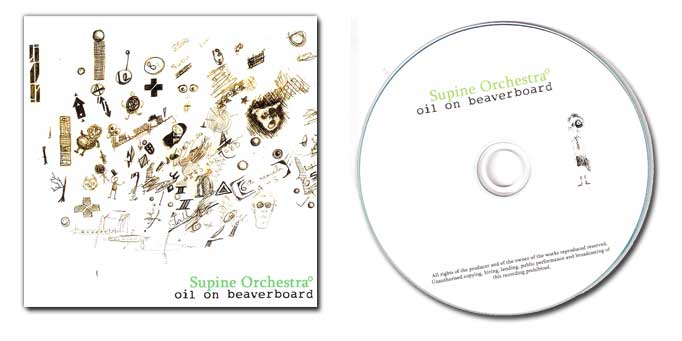 "Oil on Beaverboard" is the critically acclaimed second album and was produced in July 2010.

5. Waiting For The Butterflies

8. There'll Be No Whiskey In This House No More

"An album with presence and thought-provoking songs...reflecting their calm, unruffled and slightly jaded view of the world....gently placing an original stick in the country/folk/acoustic ground... There’s depth, intrigue and observation that will engage from the first... This album is a carefully crafted subtle selection of melodious acoustic country folk. If you’re stressed, uptight or just plain scratchy, this album will ease the strain away" (Folkwords)

"My Imaginary God" shows they know how to write a catchy pop melody, while the tropical lilting "Taliesin West" displays their instrumental prowess. This is perfect music to dig out when skies are sunny, the beer’s chilled and the smell of new mown grass is on the wind. Just don’t poke around too much in the lyrical undergrowth, there may be worms" (Net Rhythms)

"It takes a lot of hard work to make something sound as effortless as "Oil On Beaverboard" all strength to them they seem to have this melodious folk pop pretty much off pat…… lyrics worth paying attention to, positively bristling with great phrasing and cunning observation…… reminiscent of the scene in a Spaghetti Western, where the film's ultracool hero/gunslinger has his hat pulled over his eyes whilst his horse pulls him in a travois across the grasslands." (Fatea Magazine)

"An oddball collection of songs that skirts the imagination... A defiantly lo-fi smorgasbord of songs... The album ploughs this furrow with aplomb and conviction" (Americana.UK)

"A more matured and haunting offering of indie-folk......admirable warm and emotional qualities... mellow outbursts of accordion, slide guitar, mandolin and percussion keep the interest flowing like a Jewish man’s savings account …. Supine Orchestra are deeply melancholic songwriters, yet polished and refined to that respect …. includes The National-esque track ‘Under The Radar’ and the hushed downbeat quality of ‘Cold Carry On’ that makes itself akin to one of the emperors of downbeat - Elliott Smith". (Bearded Magazine)